Top 10 Tips for US Expats in Spain

It’s exciting living abroad. It truly opens your eyes to how big the world is. In my opinion, there’s no better place for US expats than Spain. I have lived in Spain for 5+ years and, though somewhat different to life in the US, it is a great place to live and raise a family. If you’re thinking about coming to Spain, or you’ve already made the move, check out my top 10 tips for making the most of your time abroad.

Tip #1: Assimilate into the Spanish culture

Spanish culture is unique, but it’s not so different from American culture, as say, Indonesian culture, for example. They’re both Western cultures, and you’ll find a lot of similarities when it comes to fashion, family, religion, etc. That being said, there are things that are uniquely Spanish. Tapas and cañas. Flamenco. Spectacular festivals like the Running of the Bulls, Las Fallas, Feria de Sevilla, etc. Eating a full meal of paella with a table and chairs right on the beach, with hours of sobremesa afterwards.

It’s okay to miss things about your life in the United States. I’m often found making recipes from back home and celebrating American holidays. But constantly comparing your life in Spain to your life in America will make you miss home and not let you experience the true beauty of life in Spain. Make sure to find a balance between Spanish culture and your American culture. Eat at Spanish hours and try at the typical cuisine. Take part in the holidays and understand why they’re celebrated. Find a network, not just of expats, but of also Spaniards.

Remember that you’re in another country, not America, and it’s your job to adjust. If you do, your time in Spain will be so much more enjoyable. 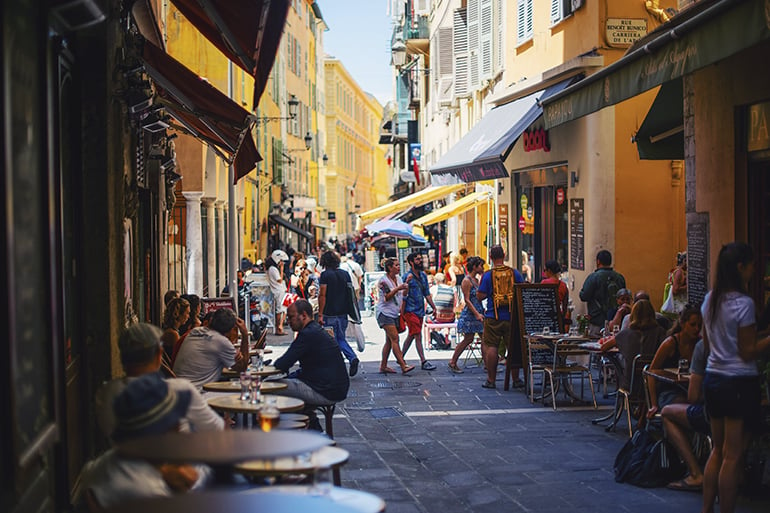 Tip #2: Choose the right destination for your situation

Are you coming to Spain to retire? For a multi-year sabbatical or job assignment? To study for a semester? Depending on your situation as a US expat in Spain, you might want to consider different areas of Spain:

Tip #3: Housing will be smaller

Spain has very little space. Even if you’re used to a pricey NYC apartment, chances are, your apartment there was of a similar size as your apartment in Spain. The difference here will be price. Madrid is a lot cheaper than large American cities like NYC or LA. However, if you’re coming from a house in the suburbs or countryside, be prepared to majorly downsize. Big cities like Madrid and Barcelona mostly offer apartments up to 3 bedrooms. You’ll be hard-stretched to find 4+ bedrooms. In outlying towns, you can find larger offerings, a chalet or an independent house even, but be prepared for it to be smaller than your average American-sized house and much more expensive per square meter.

The cost of living in Spain is quite affordable. That being said, prepare for your salary to be reduced to half, one-third, or more of what you’d comparably make in the United States. The best option for an American would be to move to Spain with a job at an American company or an international company. You’ll live like a king or queen! The average salary in Madrid, for example, is around 23,000 euros.

Discover the cost of living in these major Spanish cities:

In Spain, they speak Spanish...makes sense right? Now, being a country of lots of tourism, you’ll inevitably find pockets where English is spoken (the islands or the coast), but most Spaniards do not speak English at a high level. You can get by on English for a while, but you should start learning Spanish as soon as possible in order to navigate everything from getting on the bus, going to the grocery store, answering the phone, etc.

Tip #6: Get a reliable lawyer or gestor

I’m sure you’ve heard that Spanish bureaucracy is tedious and complicated. You heard right. Even after all my years of being here, my Spanish husband takes care of most of my paperwork and even then we normally go through some sort of gestor or lawyer to double-check things. If you can afford it, it will save you a lot of time and effort if you have someone trustworthy to do your visa or residency renewals, employment papers, tax filings, and more.

Tip #7: Transport is widely available within Spain, decide if you need a car

The quintessential American experience of getting your license at 16 and roaming around in your car doesn’t really exist in Spain. First of all, they can’t get their license until 18 years old. But having so many transport options available also means that you might not need a car while living in Spain. Discover the pros and cons of owning a car in Spain.

In most medium to large sized cities, there is a metro (subway) system, bus network, or tram that can take you anywhere you need within the city. Then, there are suburban trains (Cercanias, in Madrid, for example), and longer-distance trains (AVE) between cities in Spain and even France/Portugal. Airports in Spain connect to various points around Europe and the world.

The difference in healthcare between the United States and Spain is astounding. I have never once worried about my coverage in Spain, through getting a cold, getting vaccinated, giving birth in Spain, and every other situation you can imagine. That being said, this all depends on your healthcare rights in Spain. If you have residency and work in Spain, you’re eligible for public healthcare. If you’re on certain visas or short-stays, you’ll need private healthcare coverage while in Spain.

Tip #9: Find a network of expats and locals

Expats are a huge resource and can be so helpful when settling down and adjusting within Spain. You’ll make friends with other US expats in Spain and meet people from all across the world. Sometimes having compatriots to talk to is exactly what you need. But beware - don’t fall into the trap of having only expat friends, because more often than not, they return home at some point. If you’re going to return home too, that’s okay, but if you plan on staying in Spain long-term, you’ll find yourself saying goodbye to all of your friends.

That’s why it’s important to make friends with local Spaniards as well. Where can you make friends? Through your work or hobbies. At a meetup or club. In your building or neighborhood.

What’s the point of living in Spain if you don’t make time to see Spain? It is one of the top tourism destinations in the world for a reason. I have lived in Spain for 5+ years and explored every region of the country: check out my ultimate Spain travel guide. My top advice for traveling around Spain is don’t just stick to the touristy destinations like the beach and major cities. Get off the beaten path. Find those charming little pueblos nobody has heard of. Take in nature wherever you can. And cherish every moment, because you never know how long you’ll be in Spain.

Study Spanish in Spain for adults