More and more signs with arrows and yellow scallops appear as we pass through Spain, making the pilgrimage to Santiago de Compostela a booming activity. Since its beginnings in the Middle Ages, there are many Camino de Samtiago walking paths that have been traced throughout Europe. Here are some of the main Jacobean routes that you can follow, between valleys and mountains, through the Iberian Peninsula.

Recognized as the First European Cultural Itinerary and declared a World Heritage Site by UNESCO, amongst other recognitions such as the Prince of Asturias Award, the Camino de Santiago, is enjoyed by thousands of people every year.

Choose your route among those that we propose below depending on the starting point and the days you are going to dedicate. And remember, if you want your 'Compostela' certificate from the Pilgrim's Reception Office on arrival in Santiago de Compostela: you have to do, at least, the last 100 km on foot or horse or the last 200 km by bike.

Although there are many Jacobean routes, the most popular and recognized as the 'Camino de Santiago' par excellence is the “Camino Francés”. Already described by Aymeric Picaud in the 12th-century Calixtino Codex, most of the medieval pilgrimage routes from the Gallic country converged on this route, which crossed the Pyrenees, usually from Saint Jean de Pied de Port, or through Roncesvalles (Navarra) or through the port of Somport (Huesca).

The route offers sections of extraordinary beauty and with numerous examples of our historical legacy. Now, this is the most frequented route by far, so it is convenient to plan in advance the places where we want to rest, especially if the season coincides with a Compostela or Jacobean Jubilee Year (those in which the 25 July, feast of the Apostle Santiago, falls on Sunday) or with other extraordinary festivities. 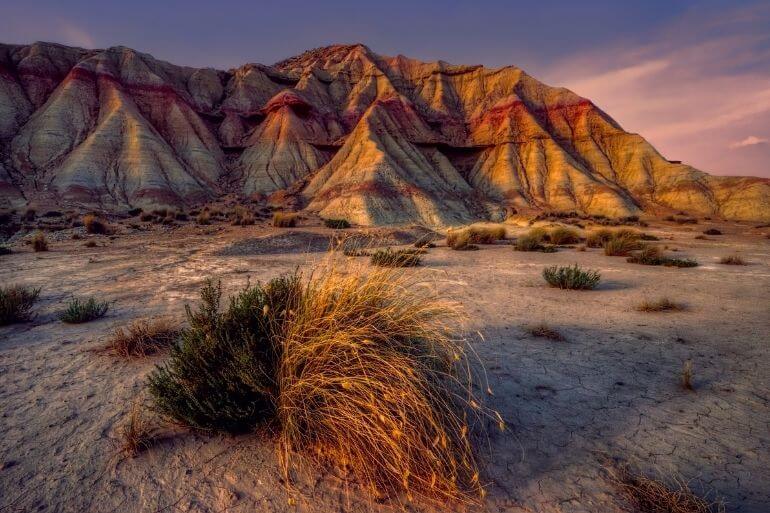 From the 12th century, after the independence of Portugal, the pilgrimage to Santiago de Compostela from the Portuguese country acquired great relevance and numerous routes were opened, sometimes followed by kings, nobles and clergymen. At present, it is the second busiest itinerary, after the French Way.

By land, three routes stand out:

Camino del Norte: one of the most beautiful

Despite its difficulty, the Northern or Coastal Route was, perhaps, the most used until the 10th century to go to Santiago de Compostela, since the plateau was still occupied by Muslims.

The road that runs from east to west through the north of Spain, between the mountains and the Cantabrian Sea, is one of the most beautiful and attractive Jacobean itineraries. And the longest after that of the Vía de la Plata.

From the Hendaye bridge, this route crosses the Basque Country, passing through Donosti, Zarautz, Guernika and Bilbao; it crosses Cantabria through Laredo, Santander, Santillana del Mar and Comillas; it crosses Asturias, which, after Llanes and Ribadesella, allows two variants: 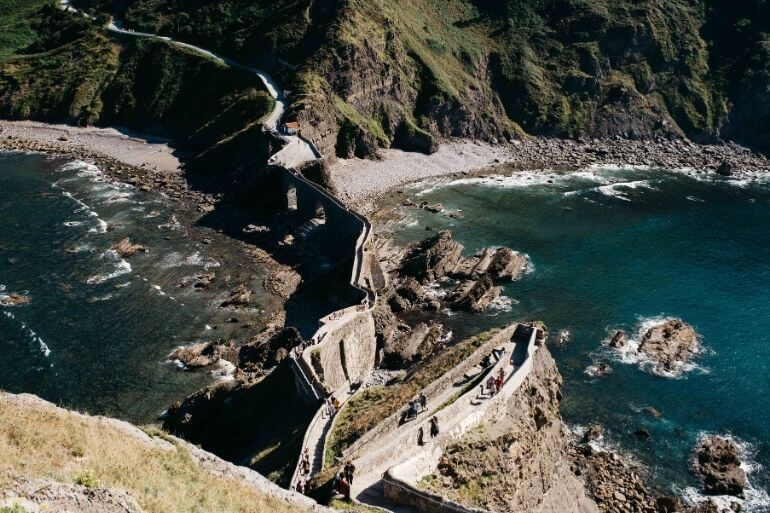 The Primitive Way, considered the first Jacobean route, goes from Oviedo to Santiago de Compostela following the itinerary that, according to tradition, Alfonso II the Chaste traveled to the tomb of the Apostle, recently discovered in the 9th century.

The route runs through the green valleys of various western Asturian councils, such as Cornellana, Tineo, Pola de Allande and Grandas de Salime. And already in Galicia, it crosses A Fonsagrada, Lugo and Palas de Reis, where it connects with the current French Way.

For pilgrims, this path had a special spiritual value, mainly because of the great collection of relics in the Cathedral of San Salvador in Oviedo and because of the permanent exhibition of the Blessed Sacrament in the basilica of Lugo.

Arisen as an extension, from Seville -now, even, from Cádiz- to Galicia, of the ancient Roman road that crossed the peninsular west from south to north, communicating originally Emerita Augusta (Mérida) with Asturica Augusta (Astorga), the Camino Vía de la Plata, also known as the Mozarabic Way or the Southeast Way, is the longest Jacobean route.

After the province of Zamora, there are at least three options. Some continue to Astorga, linking there with the French Way. While others take the deviation from Puebla de Sanabria (Camino Sanabrés) to Ourense or cross the northeast of Portugal and enter the south of the province of Ourense towards Verín, where it joins the Camino Sanabrés.

Throughout its extensive route you can still see some of the polished stones of the road (it seems that the term 'Silver' could come from the Arabic B'lata, which means 'paved road'), ruins testimony of their culture, churches, bridges, aqueducts and cathedrals. However, the best time to travel this route enjoying its landscapes can be in spring, trying to avoid the excessive heat of the months of July and August.

Medieval pilgrims from northern Europe and the British Isles made the English Way by sea, disembarking at the port of A Coruña or Ferrol to go to Compostela.

Once on land, the path passes either through Ferrol, Pontedeume, Miño, Betanzos and Abegondo or through A Coruña, Culleredo, Cambre and Carral, both joining in the Bruma environment to go through Ordes to Santiago.

Way of Fisterra and Muxía

Unlike any other Camino de Santiago walk, whose course is towards the Plaza del Obradoiro, the Camino de Fisterra and Muxía starts from Santiago de Compostela. The trip maintains the tradition of some medieval pilgrims who, after venerating the tomb of the Apostle, continued to the cape that they considered the end of the world, the westernmost point of Europe.

There, where the sun hides in the sea with spectacular sunsets, there are those who shed clothes used on the way. Then you arrive at the Sanctuary of the Virxe da Barca de Muxía and return to the village of Hospital, to return, if desired, to Santiago. 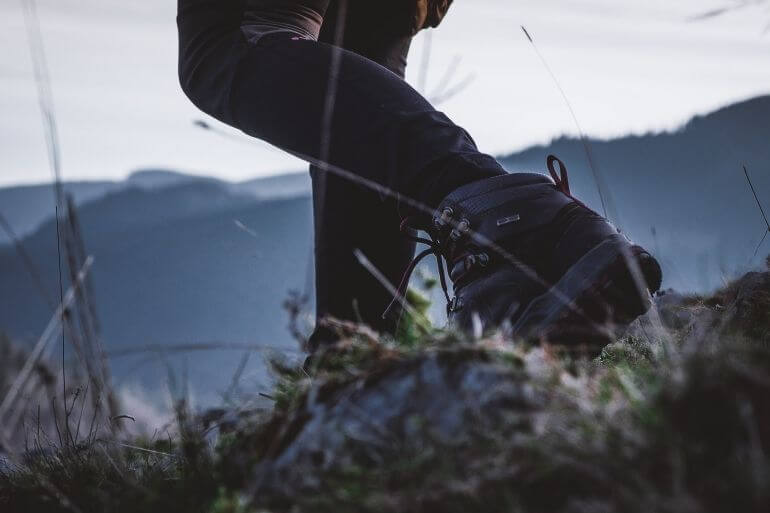 Route of the Sea of ​​Arousa and Ulla River

The Ruta del Mar de Arousa and Río Ulla, more than a road, is a set of routes that start from various northern riverside towns of the Ría de Arousa and that converge in Padrón with the Portuguese Way to Santiago.

These maritime-fluvial itineraries commemorate the arrival in Galicia by boat of the Apostle's body from Palestine and which, according to tradition, went up the Ulla river to the Roman city of Iria Flavia (Padrón).

The route can be made both along the north shore (from Aguiño and Ribeira to Rianxo), and along the southern shore (from O Grove to Carril) from the Ría de Arousa and, after 40 miles by sea and river, reach Padrón. From there, it is about 25 kilometers to Compostela, between eucalyptus forests and towns such as Ros, Teo and Ames.

Through this Winter Route, medieval pilgrims could avoid the ascent of Puerto del Cebreiro in the harshest winter season, linking the Camino de Santiago with the Vía de la Plata in its Sanabresa variant. The path follows the course of the river Sil towards Barco de Valdeorras and Monforte de Lemos, then crossing the river Miño. In Chantada, head west until you reach Lalín.

In addition to avoiding the snow-capped peaks and having the river as a companion throughout the trip, with this itinerary we can enjoy passing through the archaeological park of Las Médulas, declared a World Heritage Site, and crossing part of the Ribeira Sacra, in southern Lugo, in which we will find numerous Galician Romanesque churches.

We want to dedicate our route number 10 to all those others that we have not yet been able to name or that are yet to be done. It should not be forgotten that the pilgrims of the Middle Ages began their journey from the very door of their home.

Among others, those from the Levante and Catalonia can follow the Ebro Paths, through the river valley, up to Zaragoza and Logroño, and thus meet the French Way.

The Camí de Sant Jaume runs through Catalonia, from the Monastery of Montserrat towards Zaragoza and, at the height of Tárrega, you can turn towards Huesca and reach the Aragonese Way.

From Valencia and Alicante, taking the Caminos de Levante you can cross the center of the peninsula through Albacete, Toledo and Ávila, to the Vía de la Plata in Salamanca or Zamora, or choose more northern routes (Cuenca - Madrid) to join the Camino de Roncesvalles .

The Wool Route is the path that was followed in the footsteps of ranchers and shearers from La Mancha to Burgos.

And for those who depart from the capital of Spain, the Camino de Madrid crosses the Sierra de Guadarrama through the Fuenfría port and heads over the Roman road towards Segovia and Valladolid, until it joins the Camino de Santiago at the height of Sahagún.

5 Places to Visit in Spring in Spain