Best Way to Carry Bikes on Your Car

Cycling has an ever growing number of fans. Healthy and active life goes through many pedals, whether on urban, road or mountain bikes. We’ve spoken about road trips, we’ve spoken about cycling routes… It’s only logical we now speak about the best way to carry bikes on cars.

Now, while some use bicycles as a means of transport on a day-to-day basis, others use them to escape from the routine and often have to travel by car to do so. So, how to go about it as safely and legally as possible?

The simplest and most affordable option is to put the bicycle inside the car. Whether disassembled or not, we can put the bike in the trunk. If necessary, folding the seats, but securing the entire load as much as possible so it can’t move an inch.

The General Traffic Regulation is not clear regarding how we should transport the load inside the vehicle, but common sense tells us to secure it with straps. Care must also be taken to ensure that it does not protrude too far from the cargo space to avoid interfering with visibility. This way we will avoid a possible sanction by the authorities.

Entering the terrain of the bicycle racks we will start with the roof rack. Despite this possibly being the most widespread option, if we’re completely honest, in reality the roof racks are the most uncomfortable one, since you have to lift the bike up onto the roof of your vehicle.

But let’s review our options here… Almost in disuse, the first is the one that places the bikes with the wheels up holding the handlebar and saddle. Its practicality is limited as it can end up damaging the bicycle. Secondly we have another type that consists of a rail on which we support the rear wheel in the back and in the front, disassembling the front wheel of the bike, holding the fork dropouts. The benefit is a firm hold without too much stress on the bike, the disadvantage is that the front wheel must go in the trunk.

Finally there is the most widespread system whose structure consists of a rail and one or two arms. The two wheels rest on the rail and are secured to prevent displacement and the arm or arms hold the frame of the bicycle to maintain verticality. This bike rack is more expensive but does not require disassembling anything.

Rear door bike racks are among the best ways to carry bikes on your car, and they're becoming a more popular choice. They are easy to use, more comfortable to carry thanks to better accessibility and their installation is relatively simple.

Using mechanical supports and straps, the bike rack is attached to the tailgate of the car. Depending on the model, we can load between one and four complete bicycles without disassembling.

But they also have cons, in this case: they’re much more bulky and susceptible to being struck by parking and maneuvering, so it is best to disassemble them every time we finish transporting bicycles, unlike rooftop bicycle racks. It also reminds us about the importance of good car insurance!

In this case, it must also be taken into account that both the bicycle rack and the bicycles that we carry are very likely to cover the license plate and the rear lights. The rack will have to equip a third license plate and the necessary signaling elements, apart from the V20 plate that alerts other drivers that we carry a load that protrudes from the rear (check the insert about Regulations). 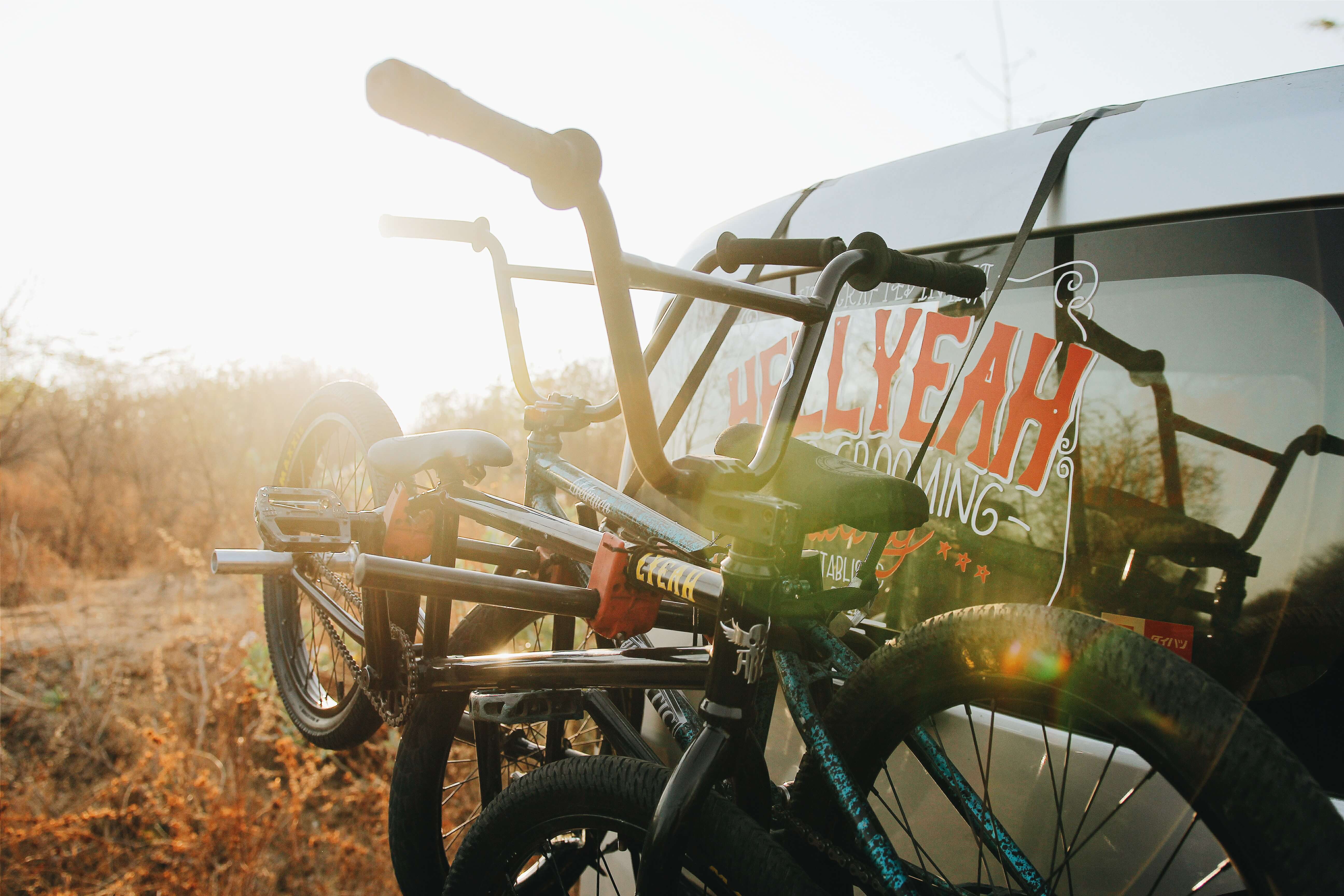 A third option is represented by the bike racks hooked to the hitch ball. These systems are the newest but have a major drawback: they obviously require the installation of the hitch ball previously. If you already have one on your car it’s perfect.

The anchorage of the bicycle rack is made with a specific support that wraps onto the hitch ball and does not require additional supports to the body or chassis of the vehicle. You can mount one or more bicycles on its rails, depending on the model.

Perhaps its greatest advantage is that most of the models sold today are tilting, they lean back - even with the bikes already loaded - to allow the opening of the trunk. 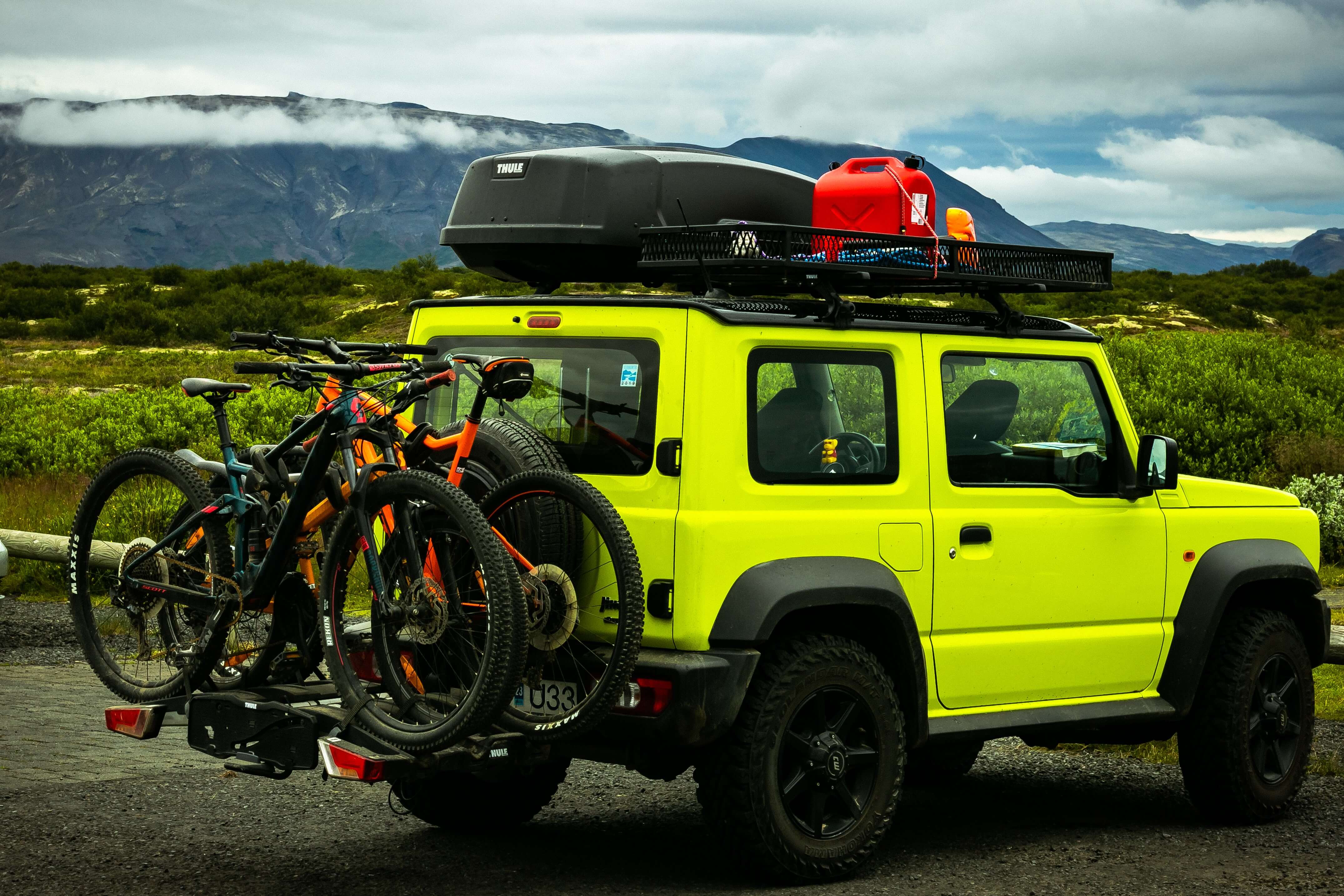 As a more specific option there are bicycle racks that are integrated and hidden in cars, but currently only Opel offers this type of equipment with the FlexFix system.

This system consists of a hidden bicycle holder that extends outwards from the rear like a drawer and does not require any additional mounting beyond the lights and the license plate.

It is by far the most practical system of all but it is also expensive as it is an original accessory that must be ordered from the factory, it can only be installed in new cars and it is not compatible with the subsequent installation of a hitch ball.

When installing any type of bicycle rack, we will also have to consider some regulations. The first is the most obvious and we have already mentioned it: if the license plate and/or tail lights will be completely or partially covered, making certain accessories necessary.

For the roof racks, the Regulation indicates that the maximum height allowed is 4 meters, so we should not worry except in the case of large vans.

Another important detail: nowadays more and more bikes have 29-inch wheels, so their dimensions are considerable. If we carry a tailgate or hitch ball bike rack, it is possible that the bike protrudes laterally which is not allowed by the Spanish Directorate-General for Traffic (DGT), so the wheels would have to be removed.

For bicycle racks installed at the rear, its length must also be reviewed, since the regulations only allow any installation to stand out for a length equal to 15% of the vehicle. Thus, in a Dacia Sandero, measuring just over 4 meters, the bicycle rack can only protrude 60 cm.

In addition, any installation that extends behind the vehicle on the longitudinal axis will have to be indicated with a V20 sign. And, in the event that the bicycle occupies the entire width of the vehicle, it will have to have one on each side. In this situation the lines of the V20 signals will have to be arranged forming an inverted V.